Post-installed anchors fail under shear load due to steel failure, concrete edge failure or pry-out failure (concrete failure on the opposite side of the load).
Steel failure due to shear load is characterized by rupture of the bolt or sleeve (Figure 12a). Anchors close to an edge may fail due to concrete edge failure (Figure 12 b1). If anchors are positioned with small axial spacing then a common break-out body can develop (Figure 12b2) and if anchors are located in a corner of the concrete component the fracture body is additionally truncated by the load-parallel edge (Figure 12b3). Pry-out (concrete failure on the opposite side of the load) may occur if the anchors have limited embedment depth and large diameters. Then the fracture body develops behind the point of load application (Figures 12c1 and 12c2).

Figure 12: Failure modes of post-installed mechanical anchors under shear load
a) Steel failure
b) Concrete edge failure
c) Pry-out (concrete failure on the opposite side of the load) 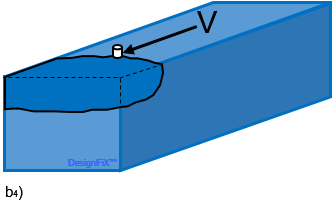 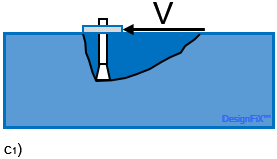 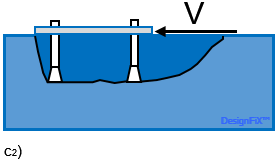